The Way to a Woman’s Heart is through Her Constitution

Philosopher Ken Wilber, designer of Integral Theory (to which I subscribe), famously quipped in his book A Brief History of Everything: “Testosterone basically has two, and only two, major drives: fuck it or kill it.” As a seasoned, soon-to-be, sixty-year-old woman, I feel qualified to confirm that testosterone is the most dangerous chemical on the planet. History shows that when testosterone courses through the arteries of power-addicted men, all manner of mayhem results.

What keeps women (relatively) safe from physical harm and sexual abuse? Law. How did we “win” the vote? Law. In what manner is our inherent right to economic parity enforced? Law. What enshrines our innate yet constantly threatened right to birth control and bodily sovereignty? Law. How is our right to mother our children after we divorce guaranteed? Law. For that matter, what protects the greatest Mother of all – our beloved Gaia? Law.

In some instances, culture and custom do protect women, children and our natural environment, but not as handily nor as uniformly as law. More often, patriarchal cultures and religious customs oppress and even harm female members of our human family, as in the case of child brides and female circumcision – primitive practices forced upon highly vulnerable young females. And don’t even get me started on the savagery of trafficking women and children ...

Of course, there also are misogynistic laws, as in the case of Sharia, routinely imposed by male Muslim judges to the detriment of women (whether intended by the Prophet Muhammad or not). So I think the reader now gets my point. On a planet dominated by men and riddled with greed, selfishness, and other base tendencies encapsulated in the classic “seven deadly sins,” the law is desperately needed, especially to protect women.

Does law equate to equality? No, not always. But if law is drafted properly, its terms clear, and its legislative intent unambiguous, miracles can happen. The evolutionary spiral leaps forward, unleashed and liberated from the consciousness of the lowest common denominator. Such was the case with the United States Constitution, amended over time to more closely align with maturing values. And such could be the case with the Earth Constitution.

To operate at Second Tier within the Spectrum of Consciousness means employing systems theory AND compassion to solve problems. It also means that engaging in moral relativism is an indulgence and a distraction from discerning universal truth and building a better world. In sum, “live and let live” is no longer an option in the 21st Century, where people flatly refuse to “do unto others” with respect and love. Rather, men of power find ways to dominate the rest of us and cleverly maintain a toxic status-quo that oppresses over half of Earth’s population.

Today, the Spectrum of Consciousness spans roughly nine levels of awareness. Quite literally, we have barbarians walking the planet alongside buddhas. Wilber goes so far as to say that the Buddha would be no big deal today, since many people have reached his level of self-realization. In my opinion, we should anchor world law to reflect the highest values of our most evolved sisters and brothers – which is what the Earth Constitution does. Then we pray like the dickens that humanity, as a whole, will one day comprehend the Truth, share the Love, and see the Light (the Oracle Institute motto). 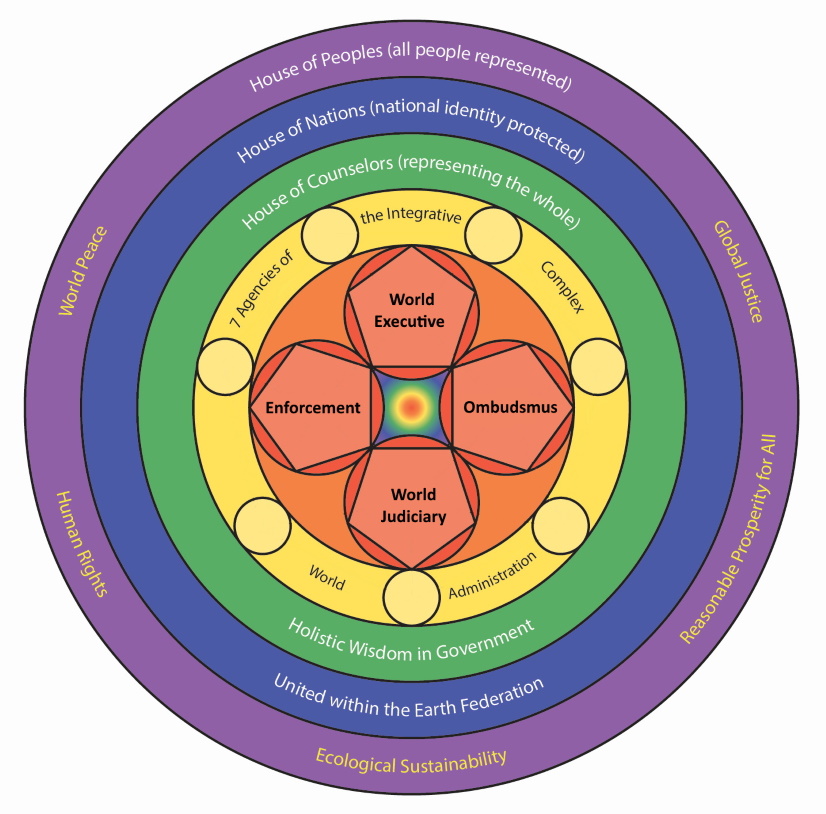 Could the Earth Constitution Model backfire? I suppose that creating 1,000 World Electoral Districts could result in an idiot or a compromised politician representing 8 million people in the House of Peoples. It also is conceivable that the House of Nations might go the way of the U.S. Senate, with small countries banding together and blocking intelligent, progressive ideas. And I grant that the House of Counselors should include non-academic members, such as Indigenous Elders who are prized for their wisdom and their love of the planet. Yet the “House of Elders” – my pet name for the Earth Constitution’s ingenious third legislative body – was precisely premised on the sacred supposition that we should honor experience, expertise, and our shared body of accumulated knowledge. Therefore, let us not get bogged down at this stage of our analysis on how to define a worthy “Counselor.” We have much bigger fish to fry.

Instead, let us note the many times in history when law acted as the very catalyst needed to cement higher moral values, inspire the better angels of our nature, and drag Neanderthals kicking and screaming into the future. Jewish Mosaic Law (date uncertain) and the Persian Code of Hammurabi (circa 1750 BCE) reflected novel ethics. The Quran (500 CE) was progressive for its day as well, giving women the right to inherit property and obtain a divorce. Then came the Age of Enlightenment and the American, French, and Russian Revolutions – all fueled by testosterone but also minds freed by science and liberated from religious dogma. Thus began the modern era of replacing (mostly) male monarchs with the ideal of Democracy.

Later, ethical standards advanced even further, thanks to heroes like Elisabeth Cady Stanton, Mahatma Gandhi, and Martin Luther King, Jr. In the postmodern era, civil rights went global, women’s rights too, along with conscientiously objecting to war. These moral movements won the day and their principles enshrined into law, thereby raising the rights and dignity of all.

In closing, the Earth Constitution holds the promise of fully (and finally) empowering women. Once women are synergistic partners, humanity will be capable of solving the unprecedented and converging global crises of the 21st Century.