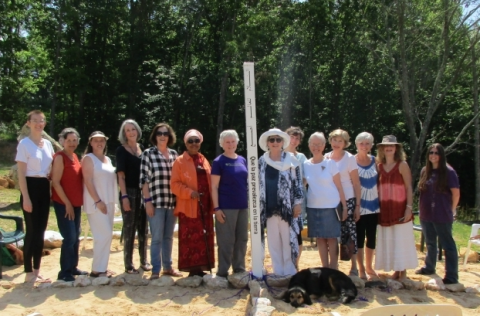 One of my greatest grievances against religion is that it still is widely used to relegate women to roles that are considerably "less than" that of men. Around the globe, religion is used to justify the way women are denied positions of leadership and authority within faith communities, subjected to religious laws that dictate how they may or may not dress, required to be chaperoned in public, abused by spouses or family members, forced into marriage at obscene ages – the list goes on and on. Some religious critics question how any self-respecting woman can bring herself to associate with such tainted institutions, seeing religious woman as participating in their own subjugation and helping to perpetuate belief systems that should be challenged rather than celebrated.

While it is true that there is much that needs to be fixed within certain religious interpretations around the world, we cannot fall into the trap of pretending that all religions are misogynistic or incapable of doing better. Instead, it should be recognized that there are those of us asking: What does it look like when religion is used to empower women, rather than marginalize or suppress them?

This question was the very theme of our latest retreat at The Oracle Institute, a Women's Empowerment retreat that pulled from the five most prominent faith traditions: Hinduism, Buddhism, Judaism, Christianity, and Islam. The retreat emphasized the female figures of each religion in a way that allowed attendees to themselves feel empowered and spiritually encouraged.

Throughout the weekend, attendees participated in ceremonies, rituals, workshops, and exercises intended to inspire them to reclaim the dignity and power of the Divine Feminine. With sessions led by Rev. Sumati Govinda of Yogaville, Meghan Don, Zarinah Shakir, and our own Rev. Laura George, the group not only was encouraged to reclaim the Sacred Feminine for womankind, but to recognize and identify the specific archetypes that each attendee carries within her and to carry the powerful female archetype with them when going back out into the world.

The weekend was kicked off with a Full Moon Ceremony, which included song and dance, prayers, and a special blessing for each of the women present. Mornings began with a yoga and meditation session with Sumati. And each presenter offered wisdom from their spiritual tradition and lead the group in an exercise – a chant, archetyping, and role playing. Woven between the workshops were ceremonies held at Oracle’s Turtle Island Labyrinth and our Peace Pole Medicine Wheel. Most significant in my opinion, was the Fire Ceremony, where participants had the chance to share their heartaches with one another and also their joys: Women supporting women, bonding over the ups and the downs of the feminine experience.

Watching as the group settled into the beautiful Oracle Campus setting, immersed themselves into the workshop materials, and started to deeply share with one another, I noticed a tone of reverence, even with all the excitement. I was immensely aware of the soul work and healing taking place. By the end of the retreat, a genuine feeling of communion and sisterhood was established among the group, as women of varying spiritual identities embraced and supported one another. It was a special weekend and I am grateful for being with those women in that moment in time, feeling the warmth and the love being shared between speakers and attendees alike.

It was so special, in fact, that we have decided to hold another Women’s Empowerment Retreat next year. So, if you missed the fun this year you can join us in June and experience it all for yourself!